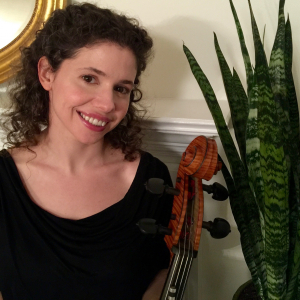 Cellist Erica Leavell grew up in New Jersey where at an early age, she began her studies with former Philadelphia Orchestra principal cellist William Stokking.  She received her Bachelor’s of Music degree from the Peabody Conservatory in the studio of Alan Stepansky.  She earned her Master’s of Music degree from New York University under the tutelage of Artist Faculty member Marion Feldman.  Following NYU, Erica attended the School for Strings in New York, where she completed a two year teacher training program and became registered in the Suzuki Method.

Erica Leavell enjoys performing in a wide variety of settings and genres.  She has performed as a member of the band Sillyheart, has been featured at Mercedes-Benz Fashion Week in New York City, and has performed with conductors such as Marco Armiliato of the Met Opera.  Her numerous chamber music engagements include serving as principal cellist with the Inscape Chamber Orchestra, The Port Deposit Candlelight Tour, and St. Timothy’s Concert series.  Erica has also performed at a variety of venues including the Kimmel Center, Lowe Theater, and Carnegie Hall.

Erica Leavell is also an avid teacher and has enjoyed sharing her love of music with students of all ages. In addition to teaching at the Duke University String School, she has served as an adjunct cello professor at New York University.  Currently she is also a cello instructor at Kidznotes, a program for under-served youth in the tradition of El Sistema, as well as a cello teacher at the Central Park School for Children in Durham.