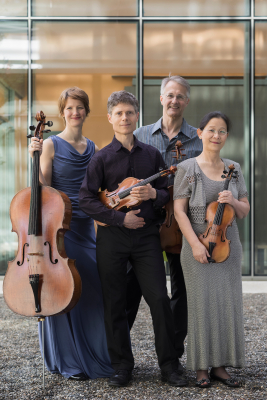 The Ciompi Quartet was founded at Duke University in 1965 by the renowned Italian violinist Giorgio Ciompi. All its members are professors at Duke and play a leading role in its cultural life, in addition to traveling widely throughout the year for performances. In a career that includes many hundreds of concerts and spans five continents, the Ciompi Quartet has developed a reputation for performances of real intelligence and musical sophistication, and for a warm, unified sound that is enhanced by each player’s strong individual voice. With a maturity and insight born of wide experience, the Ciompi Quartet projects the heart and soul of the music, in a repertoire that ranges from well-known masterpieces to works by today’s most communicative composers.

Recent concerts have ranged across the country from Washington State to California, Texas, New York and New England, and abroad from China to France, Italy, Germany, Prague, Serbia and Albania. In the summer the Quartet has performed at Monadnock Music in New Hampshire, at the Great Lakes Chamber Music Festival in Michigan, North Carolina’s Eastern Music Festival and Highlands Chamber Music Festival. Collaborations have included the distinguished talents of pianists Bella Davidovich, Menahem Pressler and James Tocco, the Borromeo Quartet, saxophonist Branford Marsalis, soprano Tony Arnold, and jazz vocalist Nnenna Freelon, among many others. The Quartet’s commitment to creative programming often mixes the old and the brand new in exciting ways. It’s extensive record of commissions includes many strong works that it continues to play on tour. Close ties to composers such as Paul Schoenfield, Stephen Jaffe, Scott Lindroth, and Melinda Wagner have produced important contributions to the repertoire; the quartet recently premiered Stephen Jaffe’s Third String Quartet and Lindroth’s Cello Quintet, written for the Ciompi and cellist Ashley Bathgate. The group’s latest recordings are on Toccata Classics (a string quartet by 19th century violin virtuoso Heinrich Ernst), and Naxos, which released “Journey to the West” by Chiayu Hsu in 2015; also on Naxos online is a recording of the quartets of Paul Schoenfield including the popular “Tales from Chelm.” Numerous other discs are on the CRI, Arabesque, Albany, Gasparo, and Sheffield Lab labels, with music from Haydn, Mozart, and Beethoven, up through the present. 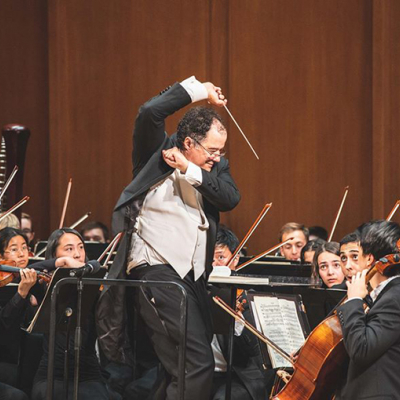 In July 2000, he made his major orchestra conducting debut, leading the National Symphony Orchestra in concert at the Kennedy Center in Washington, D.C. Mr. Davidson has guest conducted orchestras in Austria, Finland, and the U.S., including the Charlotte and Akron Symphonies, as well as the Symphony and Chamber Orchestras of the Oberlin College Conservatory of Music, where he has held residencies on two occasions. HE has held positions of Associate Conductor of the Wichita Symphony Orchestra, Professor of Music and Director of Orchestras at Wichita State University, Conductor of the Cleveland Orchestra Youth Orchestra, which during his tenure, was one of five youth orchestras selected from across the country to participate in the National Youth Orchestra Festival at the Interlochen Center for the Arts.”

For 13 years, Mr. Davidson was the Music Director of the Tacoma (WA) Youth Symphony Association where he embarked on building an internationally recognized innovative program expanding the Association from two to five orchestras, serving over 400 students and introduced a Bach Festival, extensive chamber music programs, state and international travel, and a unique summer music experience known as the Evergreen Music Festival.