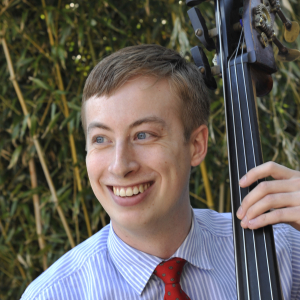 Teacher of Bass and Chamber Music

Based out of Raleigh, NC, Dr. Hobin is a frequent performer of orchestral, chamber, Baroque and 20th/21st century repertoire, as well as jazz, rock, and other styles.  Praised as a passionate, accurate player, Zachary is working hard to negotiate the space between popular and “high” culture as well as between the concert hall and the greater world.

Zachary has taken on performances in many settings and genres with great success. As an orchestral bassist, he has recently appeared with the Riverside Symphony and New York Symphonic Ensemble as principal bass and the North Carolina Symphony and Charleston Symphony as section bass. As a chamber musician, Zachary performs with the Annapolis Chamber Music Festival, a group he founded and runs. Zachary has loved playing new music since his undergraduate days and has performed with groups such as New York's Argento Ensemble and in solo and group recitals around the world.

One of Zachary's passions is to spread the joy of music to those who wish to learn more about it. He has been lucky to have the opportunity to teach in many settings, from the college lecture hall to community music schools in Ecuador and Bolivia. In addition to teaching privately and in master classes, Zachary coaches chamber music and leads group improvisation workshops. Currently he maintains a private studio in Raleigh, NC, and will be teaching bass and chamber music with the Duke University String School beginning fall 2019.