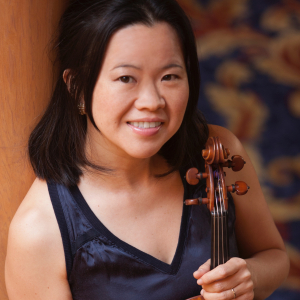 Nonoko started her violin training at the age of six in her native Japan. She grew up studying with teachers who were close pupils of Dr. Shinichi Suzuki, the founder of Suzuki Violin Method. After meeting Lewis Kaplan, she moved to New York to pursue her violin study with him. She received Bachelor's degree in violin performance from the Mannes College of Music and later received her Master's degree from the Juilliard School.

Since winning a position with Hartford Symphony, Connecticut in 2001, she has appeared with numerous orchestras including Harrisburg Symphony, Allentown Symphony, Charleston Symphony and Savannah Philharmonic. Currently Nonoko plays with the Winston-Salem Symphony, Greensboro Symphony and regularly performs with both the North Carolina Symphony and Charlotte Symphony.

As an avid chamber musician, Nonoko made her Carnegie Hall debut in May 2013 with Chamber Music Charleston where she played both violin and viola for seven years. She was also a second violinist with Degas Quartet from 2010-2012 performing throughout the Southeast.

She has taught privately in New York, Charleston and Greensboro for over fifteen years. During that time, she has traveled to study Suzuki Violin Method for three summers.

Nonoko enjoys cooking, knitting, running and spending time with her family. She lives in Chapel Hill with her husband Simon Ertz, who is a violist, and her two children Yuna (7) and Aki (5).