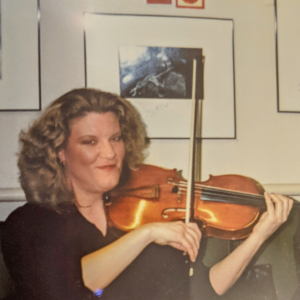 Lisa Mae Lewis recently moved to North Carolina from the Los Angeles area. She earned her Bachelors of Music degree in String Concentration from Arizona State University where she studied viola with Dr. William Magers. In addition, she studied the Paul Rolland Pedagogy method with violinist Dr. Marla Mutschler. She then earned her Master of Music degree in Viola Performance from the prestigious Boston Conservatory where she studied with Edward Gazouleas and Patricia McCarty who were members of the Boston Symphony Orchestra.

While in Boston she performed with the Boston Chamber Ensemble, New Hampshire Symphony, Vermont Symphony, and the Rhode Island Philharmonic. She also performed solo violin in the Broadway show called "I Love You, You're Perfect, Now Change" and the "Always Patsy Cline" show. In addition, she worked as a violin and viola coach with the Greater Boston Youth Symphony Orchestra where she taught many private violin and viola students.

Later she moved to Los Angeles and performed with the Long Beach Symphony, Fresno Philharmonic, Beverly Hills Symphony, Los Angeles Camerata, and the Disneyland Candlelight Orchestra. During this time, she also was the CEO of the Lewis Academy of Music. Her teachers include Dr. William Magers, Edward Gazouleas, Patricia McCarty, Salvatore Venintelli, Robert Vernon, and Steven Ansell.

She has performed with Andrea Bocelli, John Williams, Peter, Paul, and Mary, Joshua Bell, Hiilary Hahn, Sarah Chang,and several others. She has toured Spain with the Massachusetts Symphony Orchestra, China with the Los Angeles Camerata, and the United States and Europe with Opera A La Carte. Some of her recordings include "George Chadwick Quartet No. 4 in E minor" with the Avanti Quartet recorded by Sonora Records in Los Angeles ,"A Prayer for the Dying" recorded in Boston Symphony Hall with members of the Boston Symphony, and "The Wounding of a Country" chamber music for Viola, Flute, and Guitar composed by Mazen Naous which sold several copies in Europe and Lebanon. In addition, she recorded two Violin-Play-Along Disney books for the Hal Leonard Publishing Company.

When she is not performing or teaching music, she enjoys hiking, watching movies, and going to the beach. She currently works at R.N. Harris Elementary School in Durham where she teaches Suzuki violin lessons. She resides in Raleigh and has a son named Aiden who plays the cello.